Upon arriving at China Centre, the delegation had a short tour of the new Centre, which is equipped with modern learning facilities to enhance UoM online/blended learning courses’ students learning experience.

Sherry Fu, founding director of the China Centre, shared an overview of the Centre’s milestones and developments since its establishment. She introduced how the Centre has responded to covid-19 by taking challenges to relocate and upgrade digital facilities for virtual workshops delivery.  The Centre’s social responsibility campaigns further have enhanced the social impact on sustainability and community engagement. She also refreshed memorable occasions that the British Council Directors presented in support of the Centre and the university. 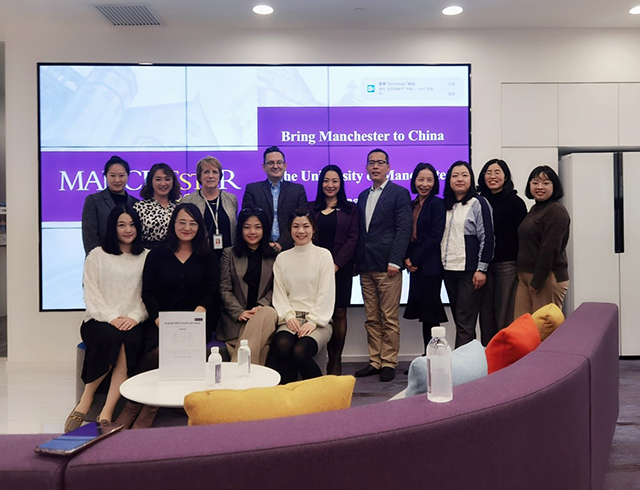 During the visit, Mr. Matt Burney said: “What The University of Manchester China Centre is doing here opens a pioneering chapter in British Education as a digital learning revolution, to extend the UK’s academic and research strength to a much wider audience around the globe. ”

“China Centre’s 13-years development has successfully raised the profile of UK’s higher education in the country. We hope to work more closely with the British Council in the future, especially on strengthening UK alumni connections and bringing more world-class online blended courses from University of Manchester to China”, said Sherry Fu.