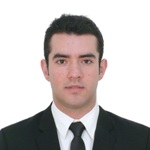 Oscar’s journey from his family’s home in Mexico to the Shanghai Centre of the Manchester Business School started seven years ago, at a dinner in Brazil. At this dinner, the 23-year old was introduced to a gathering of international diplomats by the Mexican ambassador to Brazil.

Ambassador Cecilia Soto, the first woman presidential candidate in Mexico, was his mentor during his internship at the Mexican embassy in Brazil. She announced at the gathering, “This is Oscar. He is just starting his career right now.”

When Oscar heard such an introduction from such a prominent Mexican figure in front of such an esteemed crowd, he thought, “She is giving me importance and recognition.”

“I never thought they will treat me like an equal at 23,” he recalled. The ambassador then became not only his mentor, but his role model. Everyone at the time thought she was so special, when she became the first woman presidential candidate in 1994. When he got to know her as she took him to all the diplomatic events and dinners, he saw her not as special, but just as the mother of her friends, who accomplished big things.

The message that filled Oscar from that experience: “If someone like the mother of my friends can do what she did, I can just follow my dreams as well. That had a big impact.”

Plus, it was the first time he was totally immersed in a global community of diplomats, business people and others, representing people of different backgrounds way beyond his own circle, who functioned and thought without regard to boundaries of culture, tradition and nationality. He returned to Mexico with a clear vision of who he would become.

“I saw how it works, and I decided I would like to be part of the global community.“

“I saw how it works, and I decided I would like to be part of the global community.“

“Are you crazy,” his mother said.

But his father had a different response: “Thank you so much! I’m really so proud of you. The development of the world is happening in Asia.”

It would mean that Oscar would learn enough Chinese that he could run the family textile factory that makes yarn in China for the family’s sweater factory in Mexico, run by the father’s eldest son.

And with both plants under family management by his two sons, the father proclaimed during that Singapore surprise moment, “Now I’m done.”

Oscar did take over management of the Chinese plant, but he had bigger plans. The factory business was going well, but it was just serving a local market, in Mexico. He didn’t see it as a challenge and certainly didn’t see it as contributing to his new vibrant vision to become an active part of the global community.

That was the vision that led him to join MBS in August 2012. But why MBS?

“Global! That’s the one word that describes everything” at MBS. This is the one MBA program that I found most global,” he said, noting MBS has centers in seven countries and strongly encourages students to study in more than one center.

He plans to go to Dubai for the next semester.

Another factor was that helped his decision: MBS accepted him with his seven years of work experience, while other global programs required at least 10 years. Plus, it’s very part time and allows him to maintain apersonal and professional life.

With the credibility of Manchester, he envisions going to the next level in his career. But what will that be?It could be more with textiles or trading. Or perhaps a career in international corporate or government public relations.

And that comes from his experience as Mexico’s liaison in China for the Beijing Olympics and the Shanghai Expo. He coordinated all arrangements for Mexico’s Olympic athletes and for the Mexican pavilion at the Expo. That gave him a further taste of his new future in the global community.

“I felt I was doing exactly what I wanted.”