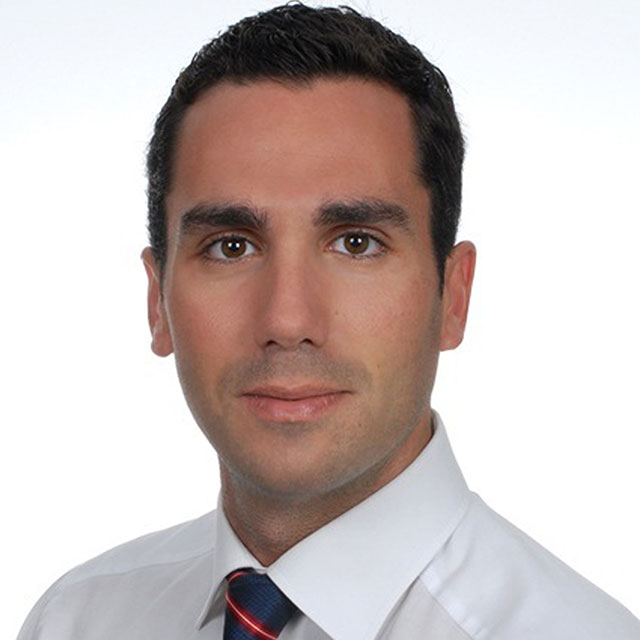 Despite long distance between Kunshan and Shanghai, Michail arrived in time at the UoM China Centre. It was already evening time. We started our interview immediately. Michail came all the way from Greece and it’s been already the fourth year for Michail in China. We wonder the reasons he came to China and study the MBA at the UoM.

To begin with, Michail believed in the high standards of British education. Therefore, he studied in the UK and graduated with BSc. (Hons) in Computing from the University of Wales. In his memory, it was nearly rainy everyday over those three years. I was curious how he got used to that weather, while he was from a sunny Mediterranean country. It was really challenging for him at the beginning, but he does believe that is up to us to focus on the bright side. Upon graduation, he decided to continue with his studies and he completed two master programs: MSc. in Electronic Business, and MSc. in Business in IT Systems under a scholarship from universities in Glasgow. I admired that he had such a foresight on e-commerce. As dated back in 2001, e-commerce just came into its first steps. Amazon was known then, but far less popular than nowadays. Alibaba was even less known especially in the global market. Online payment was more a conventional product. However, Michail had realized its potential for future transactions in every business sector.

Upon completion of his studies, Michail had to go back Greece to serve the military obligations at Greek Armed Forces. . In the meanwhile, he realized that his career should start from the place he used to be as a student. Since he was used to British way of thinking, he immediately went back to the UK upon completion of military service. He still remembered that he took his entire luggage and drove his car all the way from Greece to London, in 2005 and he started working for an insurance company in Portsmouth.

A year later, he got an attractive offer from a leading IT company in Greece, thus he returned to his home country and he stayed until 2008. In 2008 Michail made a decision to broaden his professional horizon, so he switched to the FMCG/Food industry. He accepted the challenge to join a global leader of hard-discount in retail as an Area Manager and to run up to 6 supermarkets in the wider area of Midlands and North Wales. He was in charge of negotiation, logistics, operations, audit, IT, HR, budget control etc. In 2010, the group had a promising plan for Greek market and Michail grabbed this opportunity. Michail was in charge of developing the business network by opening new stores. However, the group unexpectedly decided to withdraw itself completely from the Greek market and all the employees were terminated. However, Michail didn’t give up. He soon started up a company with his brother to advise on financial solutions for SMEs in Greece, as they had realized the big demand in Greece back then.

Their company has been established successfully and operates until today. It was in the middle of 2010 when he received a challenging invitation from a multinational company in manufacturing sector. So he decided to be involved at this new industry, as he predicted that this company will be developed fast after the financial crisis. At the beginning he was responsible for sales and business development in African markets. In 18 months, he successfully developed 7 new markets and in the meantime, company’s global markets went from 85 to over 100. The year of 2013 was a turning point for the multinational company, when the export volume exceeded domestic market, as well as for Michail in his career path. He became the Best Performer and therefore assigned a more important task to open up the Asian & Pacific markets. The company set up a subsidiary company with a brand new factory to serve the ASEAN markets, including China market. Michail was accountable for managing the sales, marketing and business development of ASEAN markets. Despite the heavy workload which required him to travel almost every two weeks in the Asia & Pacific countries, he was satisfied with the progress of his team and himself.  His work was paid off until 2014 when the first order came from Thailand. More orders followed up and a wide network of clients have been established. So far, he has established the brand to 15 new markets in ASEAN territory.

Back to 2009, he had the dream to complete an MBA course on an executive level from a high reputable University, but was constrained by his limited free time. His MBA dream was postponed until 2015. In 2016, the sales volume was increasing steadily, his team was performing well, and the network of agents and clients were on track.. After comparing several international business schools, he chose AMBS to start with his Global MBA study. The MBA course fitted well his requirements: blended learning with well-designed offline workshops, on International basis; authentic British education and professors. Undoubtedly, he had a special emotion towards Manchester where he used to live and work back in 2009.

Michail is a big fan of life-long learning. In 2017 he completed the online course of King’s College, London on IoT during his MBA study, with the objective to support his vision for the new era of Industry 4.0 and integrate his IT background with his current exposure in manufacturing industry. The company suggested to sponsor his MBA program, in exchange for an extended contract with him. However, he turned down this offer as he insisted to control his own fate by self sponsored   his studies. He was always thinking what’s the next step would be.. His experiences in finance, IT, manufacturing, business development, management, leadership, commercial strategyand operations, as well as his study in MBA, made him believe that he must take his career at the next level by establishing his own business. He was a strong believer of the promising future in Industry 4.0 and China’s strong competitive advantage in this area. He wanted to further expand the possibilities of Industry 4.0 in conjunction with EU, China and Asian emerging markets.

The interview was going to an end and Michail expressed his thought ‘Nothing is Impossible’ could also inspire wider Alumni. In spite of all the difficulties he’s been through, he never gave up his dream to study and progress his career. He believed that the study with AMBS would give him not only knowledge but also more resources, deeper involvement within the global business environment, entrepreneurship skills and a wider alumni network. He had a dream to start up his own business in order to blend 100% of his knowledge and working experience, under the objective that his company can make people’s life easier, efficiently manage resources in a harmonious way and protect the environment with side business activities.

So, Michail has decided to complete his career as the International Sales & Business Development Manager for Asia & Pacific in March 2018 and to initiate his personal business. Michail exlplained that this will be a startup company having as an objective to develop a technology-based innovative solution, in order to bridge the gap between the construction industry and elevator industry with side benefits for other businesses involved in construction sector. He knows that the way to establish this startup company and transform it into a successful organization, will be a long way full of obstacles and unexpected situations.  Learning the lessons of the past,  combining his professional experience with his key values such as discipline, persistence and passion, this journey will be full of exciting experiences, knowledge, interesting people, and a successful product/service which will add value to the world, making it a better place to live.