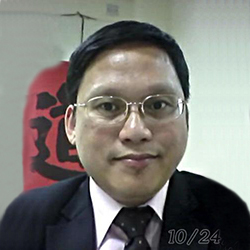 Learn to be an Original Thinker

It’s hard to imagine mild-mannered 45-year old finance director Paul Chin of Singapore banging on a table to express his strong disagreement with a top boss and then storm out of the boss’s office.

But that’s what happened earlier in his professional life, as a young officer with the Singapore police. And to be clear, that was long before he joined his current employer, the Fenner Group, the 152-year old manufacturer of conveyor belting solutions, for mines and above-ground operations, and advanced polymer products such as seals and hoses.

Paul was confronted with a choice between doing the right thing and a task that he felt was wrong. In this case, the top boss was the police commandant, who instructed him to carry out the disputed task.

“Strong words were exchanged and I banged on his table and left the office,”Paul recalled.

“I was self-principled and hot blooded. I sincerely believed that one has to insist on doing the right thing and that's the only thing that matters and if others are wrong, it's due to the failings of others.”

For a moment, his immediate future suddenly seemed cloudy. “The commandant was preparing to indict me for insubordination. My immediate supervisor calmed me down and advised me that one had to be calm, respectful and courteous even when one is right.

“It is about persuading others and not engaging in debate. Together with my supervisor, I apologised to the commandant and we managed to sort out the difference.”

And he shares that same lesson as he coaches and mentors his younger charges now, just as his supervisor did for him.

He had been a police investigator for commercial crime, and a military officer as a combat engineer trained to blow up bridges, before ultimately receiving a degree in accountancy at the University of Singapore.

Of course, these days, at MBS, Shanghai Centre, he is focused on a different sort of mission. Now after 15 years management experience, he is at MBS to receive his first formal business management education. True, he is surrounded by financial people, and at age 45, he is almost at the peak of his career, and knows a little bit of everything about human resources, finance, and accounting.

“I had a lot of business experience, but I was looking for a framework to bring everything together.”

“When I saw this energetic and energizing Xavier Duran, professor of managerial economics, he was able to explain economic theory in layman’s terms so clearly and without relying on his PPT.”

“That told me I was in the right place. This was the one that reassured me that I made the right choice, though I made a very fast choice.”

He took half a day to decide and one week to get approved, and entered the program in July 2012.

And by the way, he was not bothered at all that he is not the typical target student, due to his higher age and more senior position compared to most of his fellow students.

“It makes me feel young. Their thinking and perspective is like my daughter. It’s like me going back 25 year ago, when I was doing my university studies. I’m able to appreciate the interaction and bonding.

“I suspect I will make a few lifetime friends.”

From Goal Keeper to Striker?

Paul didn’t need an MBA to be successful. He is the finance director of the Fenner’s Engineered Conveyor Solution’s China operations. He has a handsome compensation package, with good expat benefits, and reports to the managing directors in Shanghai.

“It’s not about me progressing in the company. I don’t really believe that doing an MBA will be a critical factor in promotion in my current company. It maybe be a catalyst sometime in the future.“

As he puts it, he has “never been in a striker position. Always been the goal keeper, with internal audits, internal controls, finance management, working capital management.

“I’ve never been the one to bring the bacon back to the table.“ After his MBS experience, he expects he will be even more prepared to bring back far more than bacon when the time is right.