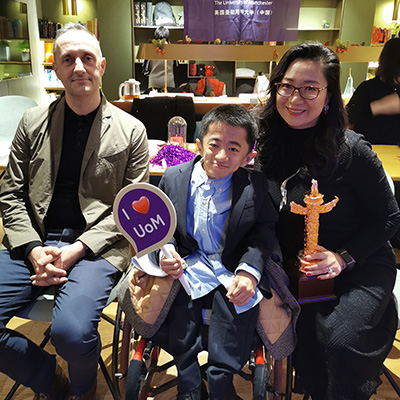 It's a great honor to be invited to this meeting to share pieces of my mind. Today, I would like to focus on the theme of social responsibility. Basically, my understanding of social responsibility is simple, that is, to be a better yourself and to inspire others. My sharing will also be about these two topics. In being a better yourself, I will talk about my thought about ideals based on my own experience; in inspiring others, I want to share my ideas upon the power of influence, on the consideration of my experience of being an entrepreneur. 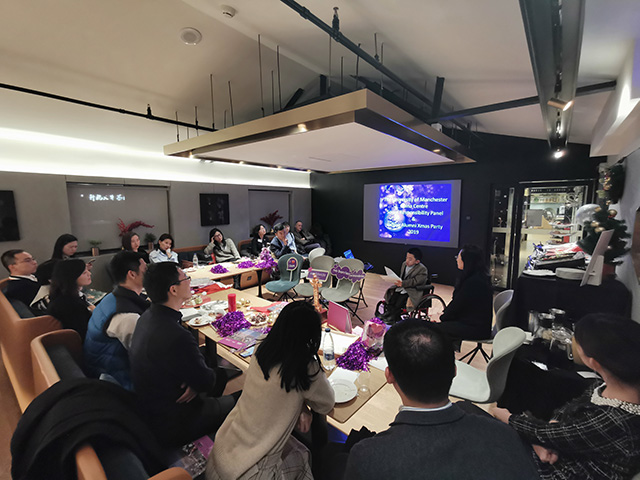 First, I would like to talk how to be a better self.

My name is Liu Daming. I was born in Lanzhou City, Gansu Province in 1994. Because of gene mutation in my childhood, I suffered from a rare disease called osteogenesis imperfecta. In the first eighteen years of my life, I experienced nine fractures, eleven major operations, in two of which I felt the death’s breath at the back of my neck. The scars left on my skin marked the progress medicine. Several screws in my body also made me an Iron Man in the real life.

Eight years ago, I went through two leg surgeries. After the surgery, from ankle to chest, two-thirds of my body was wrapped in heavy plaster, except that my head could rotate. I was made like a living mummy, with my whole body wrapped, my limbs stretching like sticks. I just lay that way in a city, whose temperature was close to 40 degrees Celsius, for 183 days! Under the confinement and illness, I was thought to be in a desperate situation, but for the first time I had a dream. In the intensive care unit, with multiple catheters attached to me, I made three wishes that everyone at that time thought were daydreams: 1. I want to find a surgical method so that I could live as long as ordinary people; 2. I want to publish a good book that can bring spiritual strength to the Chinese people; 3. I want  to receive education in a world-class university someday. I still remember when I told my doctor about these three wishes was, very excitedly, he said to me, "Daming, these shouldn’t be your dreams. You should care more about how to survive."

In 2011, my spine yielded to the gravity of the earth and changed into the letter S, hurting my heart and lungs, squeezing my stomach into a thin pipe. Every day in class, I had to negotiate with the tremendous pains. After being sentenced to the death by nearly all the well-known experts in the country, I translated the cases of myself during these years, wrote a letter for help and sent it to the hospitals of the whole world. The core point of my letter is that I want to live, not because I fear death, but because I think that my existence can make more people feel the value and significance of life. To my excitement, an Italian expert answered my letter and said, "Everyone will show different degrees of fear and unwillingness when facing death. You are only eighteen years old, but you are thinking differently. I am willing to take the risks for a brave life." In October 2011, I had a 10-and-a-half-hour spinal reconstruction operation in Milan, which set the European Union record in terms of the length and difficulty of the operation. As a result, I got a second life and fulfilled my first wish.

Back to China, I did not want to repeat my grades. In eight months, I completed 175,000 words of my personal autobiography Beyond the Destiny, using the lunch breaks and two hours after 12:00 p.m. without dropping my homework. And I became the youngest contracted author of China’s largest publishing house, People’s Publishing House, since its founding. In June 2014, I was also interviewed by President Xi Jinping. The book has sold 55,000 copies, which has moved and strengthened many people and enabled me to fulfill my second wish.

In June, 2015, I was admitted to the University of Manchester, UK, as the first Chinese undergraduate student to sit in a wheelchair and study in the world’s top 50 universities. However, before this, everyone thought that my dream of studying abroad would just be a dream. My fiancée’s visa has been refused four times by the Home Office because of the absence of a visa law that meets my condition. After all the departments concerned failed to coordinate, I decided to write to the Minister of the Home Office in order to express my desire to study. This decision has been questioned by many people, and people felt that I could not get any response. But I think that my existence itself is against probability. I have lost what most people have, but I have done what most people cannot achieve. Seven months later, I read through the immigration law, completed and submitted my application with the assistance of a lawyer. Four months later, my fiancée was granted a three-year visa. The Home Office responded to me: "Thank you for the perfection and supplement to the British Constitution. I wish you a smooth study and your dreams fulfilled."

These three wishes fulfilled, I fell into a huge confusion in my first year at University of Manchester. I found that I want to live, not because I fear death, I published my books not to win the fame,  and I went to the university not to show off how mighty I am. That is, I don't know what is pushing me ahead, and what I really want in my life. At that time, a questions kept jumping into my mind is, suppose this is the last day of my life, what sort of impression would I like to leave when the day is over? And in what a way I summarize my life? that is, what to write in my own epitaph?

While pondering over this question, I had better understanding of the ideals of human beings has something to do with the relationship between goals and objectives, tactics and strategies. Tactics are all the things that will disappear at the end of life, such as wealth, power and love. Strategies are things that can remain powerful and inspiring even after the end of life, like culture, thoughts and spirits. I  once read a story by Mr. Zha Liangyong (Jin Yong), telling his thinking about his epitaph when he was 25 years old. The story deeply moved me, in which  Mr. Zha Liangyong said, "if buried in such a beautiful place after death, I would write my epitaph like this: " Here lies a man who had ever gone through this world, wrote dozens of books, and been loved by billions of people. " What touched me most is that Mr. Zha has really spared his entire life in doing one thing, and of course in a very deep and popular way.

Finally, in the second semester of my first year in college, I made up my mind on the two things I want to accomplish in my life: 1. Create an enterprise that generate positive influence, solve social problems and promote social progress. 2. Create more popular and valuable literary works. I am also clearer about what to write in my epitaph: "Throughout his life, he is making efforts and struggles to leave a sounder world with his unsound body."

In China, there is a philosophy called "to give so as to get", which means that if you want to get something, you must give up the equivalent. This idea also applies to the ideal --- before you want something, you must consider how much you are willing to sacrifice and how much you put in. When you are willing to trade with the equivalent, the ideal may come true. 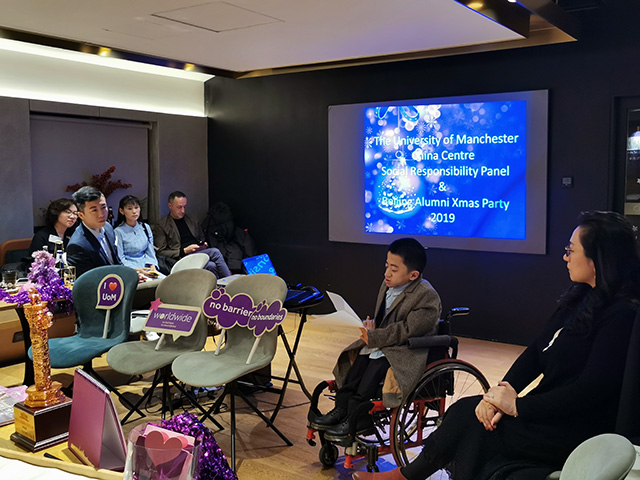 Secondly, I want to talk about how to inspire others.

I want to prove my point through two stories happened to me. The first story is that in 2012, after my spinal reconstruction operation in Italy, I was reborn and published my autobiography Beyond the Destiny, but the most exciting and meaningful moment for me was neither to get my book finished and published, nor about the money I got for the book, but to receive the private letters from 14 readers on Weibo (Microblog). Different stories expressed the same idea: “because of your book, I gave up the idea of ending my life and my confidence for life rekindled, I want to continue to try to live. " The shock and touch I felt was totally beyond description. I feel that I inspired a stranger's love and hope for life, using my own pain and disappointments, which makes me feel extremely happy and satisfied.

In the second story, I want to go on about kindling social responsibility, based on my experience with entrepreneurship. Since the reform and opening-up policy carried out in 1978, a large number of influential and highly profitable enterprises have emerged in China, but so far, on the world stage, we do not have a Chinese enterprise with the respect from the entire world. In fact, there has been an invisible conflict between profitability and value, conscience and respect over the past four decades.

I think this kind of conflict and contradiction can be lessened or even solved among the post-90s entrepreneurs in China. I have full confidence that in the next 20 years, a group of China’s enterprises by the post-90s and Post-2000 young people with social responsibility and commercial value will be really recognized and respected by the people of the world.

After graduating from Manchester University this year, I also joined the wave of entrepreneurship in China. What we are doing is somewhat like this. As we know, with the further development of Internet technology, the information of large quantity, low quality and miscellaneous types emerged at the terminals. Accordingly, in the process of daily access to information, users also meet the practical difficulties in receiving information from various channels, but of lower quality and improved difficulty in understanding the information. Because of this, many false, anti-intellectual and extreme invalid information derived from information overload affects the public's judgment on the mainstream value, attitude towards social life, and accurate acquisition of quality information. And our solution is that we designed an integrated solution for the media end and the technology end, based on the two core issues of promoting information understanding and reducing information pollution. We hope to make a description of information with words and animation, so that you can understand the things around you and the technology from different perspectives. We combine the cognitive surplus of people with the algorithm retrieval, hoping to create a high-quality information aggregation platform that meets the people's interests.

Enterprises, like human beings, should have their independent, firm and concise values. The values I set for my enterprise are: to create positive influence. At the same time, I also believe that entrepreneurship that can really create long-term value must solve the specific difficulties of some people, that is, it inspires some people's, make them clear about their real desires and demands. The price decided by the value, and the demands meeting difficulties, which is the ideal entrepreneurship in my mind.

Finally, I would like to conclude by quoting Bertrand Russell, the British philosopher:

" The thirst for love, the pursuit of knowledge, ant the unbridled sympathy for human suffering" It's hard for us to be governed by these three things like the sages, but it's a simple, repeatable, clear and operable thing to be better ourselves and to inspire others. I believe that when we can truly help ourselves and help others, we have already fulfilled a great social responsibility.

Thank you, I’d like to end my sharing here.